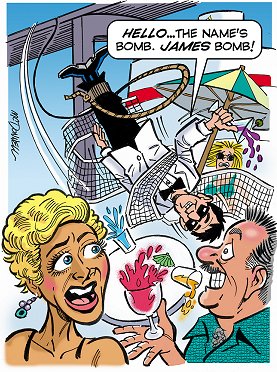 (28 September 2003, Vancouver, Canada) William, a 36-year-old carpenter, had a brilliant plan to become a stunt man. During the Vancouver Film Festival, he would bungee from the Lions Gate Bridge, gracefully descend to the deck of a passing cruise ship, and disengage from the bungee cable as smoothly as James Bond, to the awe of the passengers. Producers and movie people who had jetted in from all over the world would marvel at his work. Over cocktails, they would compete to hire him for their next film.

Stunt men work with stunt coordinators, who carefully plot out each acrobatic feat. But William was a do-it-yourself man. He planned for over two years, checking the height of the tides, boat schedules, and deck layouts. He even lined up sponsors and recruited assistants. But, as it turned out, he would have been better off with hiring a stunt coordinator.

The jump began perfectly. William took a swan dive off the bridge, trailing the bungee cord behind him. He felt it grow taut as it stretched and began to slow his descent. The tennis court of the cruise ship drew nearer... and nearer...

...and nearer, until he banged into the deck, vectored into a volleyball net, bounced against a deck railing, and found himself flying once more into the air, watching the cruise ship sail away.

William failed to make his James Bond entrance, but "people on the boat loved it," he said. "They were screaming, yelling, waving." A witness, however, described the reaction as "shrieks of horror."

William dangled above the water, confirming that no bones were broken and making a mental note to use a shorter bungee cord next time. A water taxi positioned itself beneath him, and he descended to its deck and disengaged from the bungee cable... to a less than appreciative audience.

He is still waiting to hear from the movie producers.