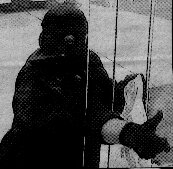 (20 March 2000, Niedersachsen, Germany) When the masked man stormed into the Volksbank and demanded money, the teller complied. Like a child demanding candy, the robber held his bag open with both hands and waited for the cash. Now any fool knows you can't hold a heavy bag of money and a gun at the same time, so he put the weapon away for a moment. The teller seized his chance and seized the gun, and suddenly the tables had turned. The confused robber raised his arm and, forgetting that his gun was missing, menaced the teller with his index finger. When the robber realized that his situation was not as strong as he had anticipated, he fled the bank on an old bike with pink protection sheet metal. The police are hunting for the man, but they have to take care. He his armed -- with his forefinger.