(1999, Darwin, Australia)
A bloke named Gordon from Darwin, Australia lost his arm, the use of his legs, and was revived three times on the operating table after an encounter with a king brown snake, the 21st most deadly venomous snake in the world. Gordon has said, "I still can't believe my arm's been chopped off just for one snake."

Perhaps nine snakes who each bit him once would be more easily believed than the one snake who bit him nine times. Gordon, who has admitted he was drunk at the time, had been driving with a friend from Mandorah to Darwin when they saw the snake. He picked it up with his left hand "because I was holding a beer in my right one." The snake bit the web of his hand, but Gordon managed to withstand the pain and put it in a plastic bag. He threw the bag in the back of the car.

Once again quoting Gordon, "For some stupid reason, I stuck my hand back in the bag, and it must have smelled blood, and it bit me another eight times." His friend drove him to a nearby hotel, where he was taken by ambulance to the hospital. His friend tried to keep him conscious by, as Gordon said, "whacking me in the head and pouring beer on me."

Despite his friend's quick action, doctors have said that it will take a long time and a lot of rehabilitation before Gordon regains full muscle control. When he does, we fondly anticipate another Darwin Award attempt.

Andrew Trouton says, "I was amazed to recognise a story I was involved in! I was working as a pharmacist in Royal Darwin Hospital when this happened. Gordon was in such a bad way that he consumed the entire King Brown snake anti-venom supplies in the Northern Territories, and we had to fly more in from other States. It was 1988 not 1998. I hope this is as close as I get to an award!" 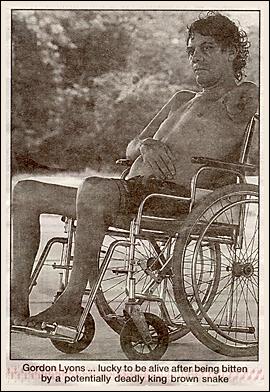 Here's the same story in another version making email rounds in Australia.

Two guys had been drinking at their local outback pub (hotel) and were driving back to Darwin, Australia when they remembered that the empty aquarium behind their local bar needed some content, as the previous inhabitants (fish) had evaporated.

There on that outback road they spotted a king brown snake sunning itself. Straightaway they knew this reptile was just what the situation demanded.

His first mistake, the victim recalls, was in grabbing the highly venomous snake with his left hand (as his right hand was preoccupied holding his beer.) The snake bit so hard it

They reversed their journey intending to deliver their prize to the pub's old aquarium. Whilst on their return, our hero was struck with a concern for the snake because the bag wasn't moving. While driving and holding a beer, he reached over and stuck his hand into the bag to check the condition of the snake. It proceeded to bite him five more times.

His friend administered first aid by pouring beer over him and hitting him about the head with a bottle.

The traumatized man was airlifted to Royal Darwin Hospital, where he underwent multiple amputations. Only one limb remains, and he is now wheelchair-bound. During his ordeal our victim's heart stopped several times, and once he was pronounced dead. The Doctor told reporters this was the most severe case of snakebite known, in which the victim actually survived.