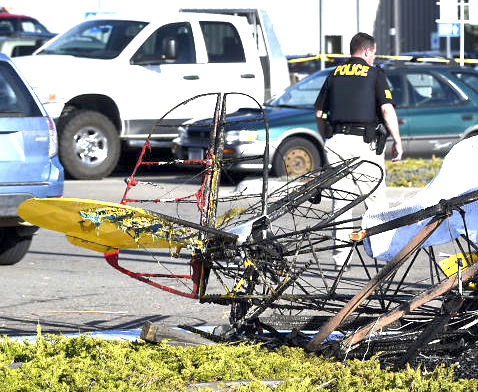 (14 October 2015, Montana) The United States is a sizeable chunk of continental crust, yet people do purchase planes on the opposite coast because flying home is easy compared to driving. Just hop airports, refueling at each hop, until you arrive at your home airport.

Pilot Patrick, 52, was up to the task of hopping his new plane home. Licensed to fly commercial aircraft, Patrick had 10,000 hours of flight time and an instructor certificate. But during the first two take-off climbs, aviation fuel (100-octane gas) had entered the cockpit and sloshed around his feet!

At the third airport in Missoula, the pilot called a mechanic familiar with the airplane, and discussed the issue of the fuel leakage, The pilot told this mechanic that he had someone inspect the fuel system, and they did not find anything wrong. The mechanic however wasn't buying it. Reasonably enough, he or she recommended NOT FLYING until the issue--a fuel venting problem--was resolved.

But did the pilot listen? Sometimes familiarity breeds contempt. This experienced pilot overruled the mechanic's recommendation and said he would fly the plane anyway, but as a concession to safety he would fly with the electrical system offline. This is referred to as flying 'in the dark' with no instruments. Patrick's decision is especially baffling because the aircraft was newly purchased and its trustworthiness not yet established.

To put the situation in plain English: During every takeoff the cockpit got a shower of aviation fuel, yet Patrick had to ask if that was bad. Told in no uncertain terms to STOP FLYING THE AIRCRAFT. his response was, essentially, "I got this." And that chap who supposedly checked the fuel system? Invented. A ruse, to convince the mechanic all was well.

Subsequently the aircraft took off from Missoula International Airport but made a sudden swift turn and crashed, exploding into a fireball. The NTSB report states, "The pilot was [likely] distracted by fuel entering the cockpit and failed to maintain adequate airspeed as he returned to the airport to rectify the [fuel] problem resulting in an aerodynamic stall/spin."

Full of experience, empty of common sense, Darwin Award Winner for good and sufficient cause: Pilot Patrick! We salute you.