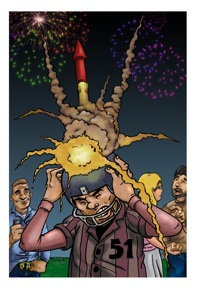 (12 August 2006, Indiana) At a party somewhere between Nashville and Bloomington, a young man was drinking and watching people set off fireworks. Suddenly a great idea occurred to him. He could improve upon this amateur fireworks display! He put down his drink and set to work.

When it comes to fireworks, your brain can't be much safer than sheltered inside a football helmet. He found an old helmet, duct-taped a mortar-style firework to the top, put it on his head, and lit the fuse...

A bright flash of light nearly blinded observers. When their eyes recovered, they saw him lying on the ground, unconscious and bleeding. Astoundingly, the 21-year-old survived this party stunt with only a mild concussion and burns.

His helmet, however, was blown to pieces.