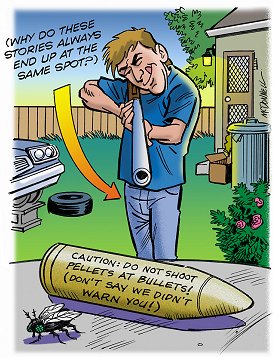 (25 March 2005, Salina, Kansas) "At the time, he was uncooperative," said the Saline County Sheriff, describing the difficulty deputies encountered in determining the cause of a self-inflicted bullet wound. Perhaps Michael, the 27-year-old victim of his inner klutz, was simply embarrassed to admit he had managed to shoot himself in the groin with a 22-caliber bullet, while armed only with a pellet gun.

The deputy's report included no mention of alcohol, so Michael was apparently sober when he placed a bullet on a picnic table and fired at it with his air rifle. The results he expected are not known. But the experiment yielded conclusive data. As he eventually, and abashedly, explained to a detective, "a pellet from the rifle hit the shell, causing it to explode."

The bullet shot into his groin, fragmenting into an area rich with major nerves and arteries, thereby presenting an interesting challenge to Kansas City neurosurgeons. They were up to the task, and Michael was thereby depriving of winning a full Darwin Award... this time!

Darwin says, "Recursively, we were recently mentioned in the Saline County Journal, the source of this article."