(5 March 2004, Victoria, Australia) The construction trades have been revolutionized by new tools that are little short of miraculous. Take the nail gun. Operating on compressed air, it turns the tedious task of nailing into a simple point-and-click operation. It also makes possible a new way to injure yourself, one hitherto unknown: hammering a nail into your brain. 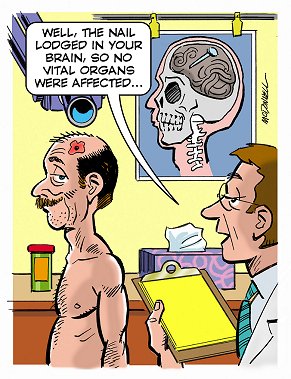 Brad, a 33-year-old bricklayer, had just finished using a nail gun to install wall paneling at home. After the safety-minded man had turned off the compressor and removed the nail cartridge, he downed a few beers with his mates while they joked "about construction site accidents, and taking your eye out with a nail gun." For dramatic effect, Brad pointed his nail gun at his head and pulled the trigger. His mates noted a small red dot on his skin.

Brad figured the firing pin had simply glanced off his skull, powered by a left-over charge of compressed air. In fact, he had fired a 3.2cm nail into his brain. He started to feel light-headed, but didn't feel much pain due, perhaps, to the anaesthetic effect of beer. Nevertheless, his son insisted on calling an ambulance.

When he arrived at the hospital the pain had become worse, so Brad asked the nurses for "a pair of plyers to pull it out myself." Instead, a neurosurgeon and a team of specialists spent four hours sawing through part of his skull and carefully removing the nail. Brad was expected to make a full recovery. "Luckily for him it lodged in the motor area of the brain and not more critical areas," said the doctor.

"I did a very stupid thing," said Brad. If the nail had been a centimeter deeper, he would likely have suffered permanent brain damage, or paralysis.