"Maybe I used too much paper." 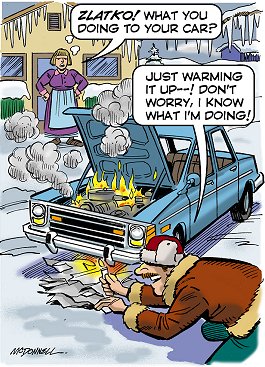 (7 January 2004, Croatia) Eastern Europe is known for its harsh winters, and Zlatko, 52, had seen his fair share of them in his town near Zagreb. But when temperatures dropped low enough to play havoc with outdoor machinery, Zlatko was exasperated to find that his Opel Kadett had fallen victim to the cold, repeatedly refusing to start.

The engine must be frozen, he decided. He remembered times he himself had been freezing in those icy Croatian winters. There was nothing better than warming up before a toasty roaring fire. Yes! That was clearly the solution to his problem. A roaring fire would warm up the Opel's engine.

Zlatko fetched some old newspapers, stuffed them under the engine, and lit them. While waiting for the engine to warm up, he wandered off -- a fortunate occurance, because his beloved car exploded in a fireball. The heartbroken man told reporters, "I couldn't start the engine and realized it was frozen. Now my lovely car is destroyed."

Luckily, Zlatko has identified what went wrong.
"Maybe I used too much paper," he said.

Reader Comments:
"One can only hope that next time he warms up a vehicle, he stays to monitor the amount of paper in the engine compartment..." michaelgoss: "Decades ago, before fuel pre-heaters were installed in diesel engines, it was common for fires to be lit under frozen engines to thaw out the fuel. In very cold temperatures this can be done with diesel, but not petrol (gasoline).