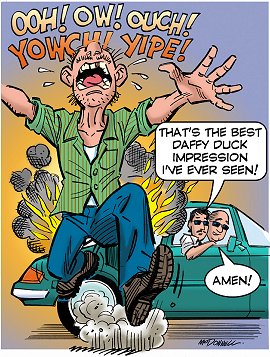 (30 July 2004, Georgia) A Walker County man's pants exploded while he was filling out forms for Social Service workers in front of his home.

Daniel, 39, was hard at work in his laboratory when uninvited guests knocked on the door. Because his work was rather secret, he poured two of the chemicals, red phosphorus and iodine, into an empty film cannister and stuffed it in his pocket before going out to greet his visitors. It was two social workers bearing forms, and Daniel walked them out to their car, sat in the back seat and began writing.

"He kept fiddling with his front right pants pocket," said the commander of the Drug Task Force. The film cannister was probably feeling warm as the red phosphorus and iodine began to react. These chemicals are key ingredients in the making of methamphetamine. What Daniel apparently did not know was that the now-boiling mixture of red phosphorus and iodine would soon reach 278 degrees Fahrenheit.

"All of a sudden, a loud bang happened, and fire shot from his pocket. It damaged the inside of the state vehicle." Daniel suffered second and third-degree burns to his testicles and leg. He was rushed to a Medical Center in Chattanooga, Tennessee, before being hauled off to jail. Sheriff's deputies raided the house and discovered his meth lab. He was charged with manufacture and possession of illegal drugs.

"That was one for the books," said a Walker County sheriff's spokesperson. "I've been in this business for more than 35 years, and that's a first.

Reader Comments:
"Don't do drugs!"
"An elementary error..."
"A new version of 'Hot Pockets' cuisine!"
"What not to put in your pants..."
"Another strong case against drug abuse."
"Talk about being all methed up."
"I know this one is true. We had him in OUR JAIL! He was made a trustee before he was released. That man could clean like hell, he could, he could!"