This award is generally bestowed posthumously.

Greetings from Team Darwin Awards! Wendy, volunteer moderators, assistant Ariane La Gauche and new artist Kevin Buckley are working hard to bring you hilarious tales of misadventure. Feel a little bit smarter about yourself. At least you didn't do this:

Doublemint Dumb December 2009, Russia | A chemistry student of the Kiev Polytechnic Institute had acquired the peculiar habit of dipping his chewing gum in citric acid while he worked, presumably to add a zesty flavor...

A Shoe-In Winner December 2009, Germany | A subway driver found a body laying besides the tracks in Berlin. It took police two days to reconstruct what had happened. Apparently Yasin A., 22, decided it would be a brilliant idea to destroy one of the windows...

Liger Menu October 2009, Oklahoma | Peter G., 32, was passionate about animals. With his huge heart and gift of connecting with animals, he was the perfect volunteer at Safari's Animal Sanctuary in Broken Arrow. Perfect until he violated the rules... 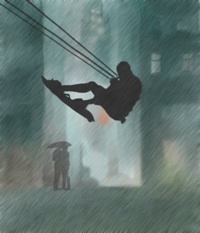 In a scientific quest with unknown objectives, a student of the Kiev Polytechnic Institute inadvertently performed a chemical experiment on himself with fatal results.

This 25-year-old chemistry student had acquired the peculiar habit of dipping his chewing gum in citric acid crystals while he worked, presumably to add a zesty flavor. He was hunched over at a computer in his parents' house in the northern Ukraine city of Konotop when, whether by intention or inattention, the student dunked his gum into an unidentified chemical and popped it back into his mouth.

A loud pop was heard coming from his room. (Reports really said that.)

Every academic laboratory emphasizes the importance of never eating near chemicals because it is easy to confuse a tasty beverage with a toxic liquid, or salt your salad with arsenic.

Putting aside the question of what he was doing with chemicals at home, the student was well aware of the need to keep chemicals away from food. But there he was, deceased, the lower part of his face blown off. Police found packets of citric acid and a similar-looking substance believed to be an explosive material, and think the student simply confused the packets.

A forensic examination established that the remains of the chewing gum was covered with an unidentified chemical substance believed to be explosive. At the time of the news reports, the local forensics lab did not have the necessary equipment to identify the substance.

Reader Comments: "Blowing the ultimate bubble." "New Chewing Gum Flavor: Explosive" "Chin up, old chap, by gum." "Must have been one hell of a bubble." "Doublemint Dumb"

DID I MAKE A MISTAKE? Contact me and say so:

A U2 subway driver found a body laying besides the underground tracks in Berlin. Because there was no video surveillance camera at that location, it took police two days to reconstruct what had happened. Apparently Yasin A., 22, was alone in the subway car when he decided it would be a brilliant idea to destroy one of the windows. By swinging feet forward from a handrail into the window, he not only managed to burst the glass but also succeeded in being sucked out of the moving train, and was left dead on the tracks. He was alone in the compartment at the time; if an observer had been present, perhaps the young underground rider would not have engaged in destructive nonsense that led to his senseless death.

Peter G., 32, was passionate about animals. With his huge heart and gift of connecting with animals, he was the perfect volunteer at Safari's Animal Sanctuary in Broken Arrow. Perfect until he violated the rules and entered the liger cage during feeding, that is.

Ligers are unusual animals, a sterile cross between a male lion and a female tiger, and (like mules) not a species in their own right. Although a liger is a evolutionary dead end, this powerful hybrid is the largest of cats. The particular liger that lived in Broken Arrow was known as a big baby--but it was not a domestic animal. The wildlife sanctuary manager said, "In all my years we've stressed that whatever you do, don't open that gate."

With a history of working with animals at the Tulsa Zoo and at the local sanctuary, he was well aware of the dangers posed by captive wild animals. He of all people should have known better than to assume his gift for communication would make him invulnerable to harm. You would think.

But Peter entered the liger cage during feeding time for reasons unknown, only to become an appetizer for the hungry carnivore. Although he dragged himself out of the cage before becoming the main course, he died in the hospital that very night.

Peter was loved, and he will be missed. But by not following very obvious safety rules, Peter G. was behaving with all the care and caution typical of a Darwin Award winner. 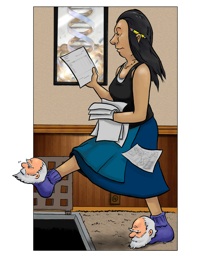 The following stories are now illustrated with Kevin's work:

Tennis Blow
Birch Slapped
Against The Odds, Nothing!          ICanSayIToldYouSo